“Creation of Adam” by Michelangelo is one of the most well-known and iconic images of human culture.

It depicts God giving life to Adam, the first human being, according to the Creation Story in the Bible (and in other religions in varying forms).

It is a magnificent aesthetic artwork including wonderful details. We all know the side of the story that is about the great talent, the technical skill and the holy creativity. But we need a deeper analysis of the situation! The main point of the work and the question the humans have asked themselves ever since their creation: Where does human come from?

Can we expect one of the most influential intellectuals of the Renaissance (and possibly all history) like Michelangelo to stay quiet about such a question? Michelangelo could have depicted the Creation Story in the Bible very simply, without using much symbolism (for example as a person being born out of earth with the dawn) and be done with it. But he didn’t do so, and we have before us a work full of symbolic messages. If you ask me, he built his ideas on the relationship of humanity-God in the painting. Neither my art knowledge nor accumulation would be enough to interpret all this, yet I will show this work to you in a way that is very clear and non-ignorable once realized. So, we will do this by focusing on two points.

You see at the right the human brain. Look at its shape carefully.

Now look at the shape in which God is placed in the mural. Do you see the similarity?

Dr. Frank Lynn Meshberger examines Michelangelo’s painting in terms of neurology and anatomy, and claims that the shape God is placed in is actually a human brain. [See: Resource 1]

It is not just a rough similarity. In a detailed analysis done by Dr. Mark Lee later on observes that the shapes in the painting matches the structures in human brain, namely sulci, cerebrum, brainstem, frontal lobe, basilar artery, pitiuatary gland ve optic chiasm. [See: Resource 2]

So what is Michelangelo trying to say? Simple. God is inside the human brain!

At this point let’s remember where the work he gives this message with is. At the roof of Cappella Sistina in Vatican! So in one of the holiest worship points for Christians. What a courage!

Michelangelo probably would have been executed within a year if he didn’t give this message this implicitly.

It’s not over yet…

Michelangelo was a master of anatomy. His interest had started when he joined public “autopsies” under the care of Medici in Lorenzo during his adolescence years. Below is an example from the drawings he did during his anatomy studies. 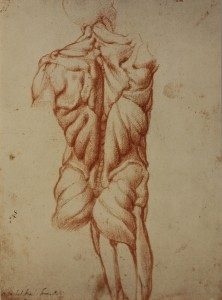 So one of his areas of expertise was his deep knowledge of human skeleton and muscle systems. He undoubtedly owed his success in drawing such realistic and alive humans to this knowledge. He knew very well how to draw the muscle structure of people in different postures. Thus it would be naive to say that the posture of people in his paintings were coincidental.

The master knew anatomy and body language very well. And apparently the choices the master made in his paintings were very conscious. With this piece of information, let’s look at the Creation of Adam again.

Look and ask these questions.

Which one of the two main figures (Adam and God) is more comfortable?

Which one is enjoying himself; which one is making an effort, trying to reach something?

Who is trying to touch who?

Look especially at the figures’ arms and their attempt to “reach out to” each other. Adam is pretty relaxed, he has his hand on his knee in a very loose and ordinary way. He’s not in a struggle to reach God. He can easily extend his arm more if he wants to. God, on the other hand, has reached out to his maximum with the support of those around him. Look at where his hands and feet are. 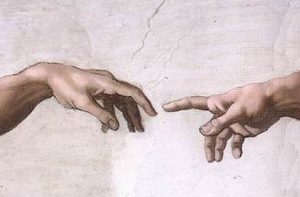 Now ask this question while looking at all the bodies and the hands.

Which figure seems to be needing the other? Which one is making more effort to reach the other?

And the most important final question:

Looking at the effort reflected in their body language and their posture, which one would you take to be stronger?

To me, power seems to be clearly on Adam’s side in Michelangelo’s painting. Even though God reachest to his furthest point with his whole body, Adam doesn’t seem to move a muscle. It is enough for Adam to move his finger just a bit to create a spark.

In conclusion; (1) God is in human’s brain, (2) The one who has the spark of creativity is Adam, not God.

According to Michelangelo, God doesn’t create human; human creates God in his mind.

At least according to my interpretation, this is the message Michelangelo gives. He is clearly, unarguably, openly saying that the human creates God in his head.

Like I said, painting this in a religiously holy place, and telling it in such a discrete and elegant way…

This is utterly genius.

[Resource 2: Dr. Mark Lee Appler.[16] On close examination, borders in the painting correlate with major sulci of the cerebrum in the inner and outer surface of the brain, the brain stem, the frontal lobe, the basilar artery, the pituitary gland and the optic chiasm.[]

Don’t Be Frothy-Minded, Get Focused! The Major…

5 Tips To Help You Prepare For That Job Interview

How To Give Yourself The Best Shot At Getting Into The…