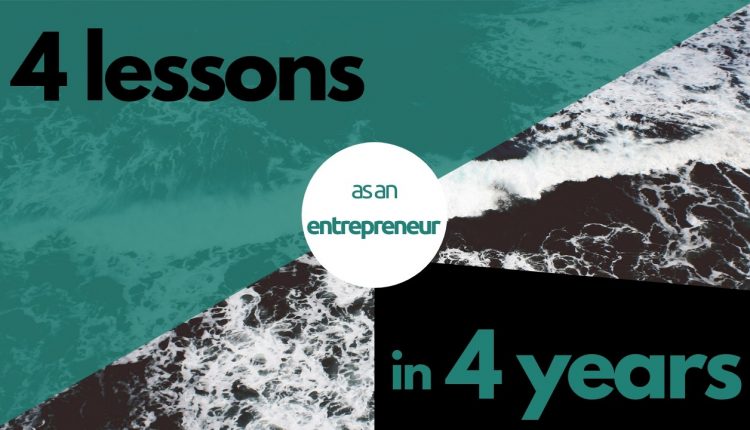 5 Lessons I Learned in 5 Years as an Entrepreneur

In casual conversations with colleagues, I like to joke around and say that I’d be a gunslinger if I lived in the Wild West – or a hunter in the Early Ages… I see being an entrepreneur today very much in the same light.

While working in a corporation is more like trying to figure out a human-made puzzle, being an entrepreneur is more like a primal fight with the forces of nature. It is a challenge that you have to respect, commit, focus, work and build mastery on.

A few years back, I was chatting with a friend that highlighted exactly how not to approach being an entrepreneur. She had a decent idea, a decent work ethic, was smart, was good with people – all the good qualities. But here we were, talking about putting a stop to it all because she was convinced she sucked at this… She didn’t. She felt like a failure. But she wasn’t.

It was her first-ever startup project that had failed, not her. There is a HUGE difference between you being a failure and your first startup failing. In the end; it was more about her ability to deal with feeling unsuccessful rather than the facts of her situation. Long story short; the rest of the conversation was about finding the right way to transition back to a full-time job.

What an entrepreneur is and what s/he do?

The problem goes deep down into a misunderstanding of what entrepreneurs are and what they do. So, here’s what I learned about that in the last four years as an entrepreneur after quitting my job at a reputable tech company, moving from İstanbul to London, launching a number of businesses, failing at some and having what I can best describe as an adventure.

Being great at deal-making

And here is the top four. Of course, there are other important things like being in tune with technology, balancing creativity in new ideas with discipline in execution, using the right mental models, planning well and more… But these four I have shared, easily take the stage as the most important things to get right – or the things that I see people getting most of the time.

There are different dimensions to each that are vital. These dimensions are not always readily visible from the outside. So I will try to elaborate.

“Entrepreneurship is about dealing with failure.”

“Entrepreneurship is about resource management.”

“Entrepreneurship is about understanding markets.”

Another personal lesson if value deeply: If you don’t have a big budget, a lot of time and an abundance of resources; opt towards taking place in an already established market that is rapidly growing (as opposed to the markets you would be the first innovator to open the space up).

“Entrepreneurship is about finding the right partners“

Even when running a solo business, entrepreneurs have to think about what partners they need now and in the future. And when you are building a team, it’s important that everyone sees themselves as potential deal-makers and not someone there just to be told what to do.

Take time to understand your company needs to create the right strategy that will attract and retain partners. Possible partners include the employees, the supplier and vendor community, the government, and the public. For a stress-free process when looking for the right talent, work with agencies such as a hospitality recruitment agency that understands the needs of the hospitality industry.

Understand what the partners need to stay focused on your business and see how you can offer them value. This will help build loyalty and long-term relationships.As you will realize, business is about creating a win/win situation, not just for you but for everyone involved in the deal.

“Entrepreneurship is about being great at deal-making.”

In reality, there is a third (and most likely a fourth and a fifth) way to do this deal. They can offer the recruitment company a “win” via a partnership. (e.g. the opportunity for them to position themselves as a tech/startup-friendly recruitment business by offering their candidates a second chance at a reputable acceleration programme even if they don’t get the role they got in touch first for.) This is a “win” has tangible business value that a partnership with the accelerator can provide. Cost = £0. Value for both parties = Big.

So the biggest takeaway, I guess, is being honest to yourself about what type of a challenge you are most suited for. Which one do you like more: Solving human-made puzzles or being in a primal fight with the forces of nature?

Temporary Work Space? Make Sure You Do This!